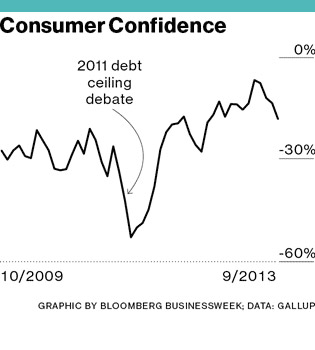 T.J. Gentle, chief executive officer of Smart Furniture, an online custom furniture maker in Chattanooga, employs 250 people, has seen sales grow 25 percent this year, and was planning another round of hiring—until Republican hard-liners forced the federal government to close on Oct. 1. Gentle is the embodiment of moderate, business-minded pragmatism: He voted for President Obama and Tennessee’s Republican Senator Bob Corker, splits his donations between the parties, and prefers divided government as a check on partisan excess. Like his plan to hire more workers, this too may change as a result of the shutdown. “It’s as if House Republicans are playing suicide bomber with the U.S. economy,” he says. “As a businessman, it defies all reason and logic.”

Smart Furniture and countless other businesses are already feeling the impact of the shutdown. The Federal Housing Administration, which backed one-third of all mortgages last year, has furloughed employees, a move that will slow loan approvals and house purchases. “That directly affects the construction and materials industries,” Gentle says, “but it also affects us, since the purchase of a new home is the No. 1 trigger for buying furniture.”

Larger businesses, which often tilt more heavily toward the GOP, are no less frustrated. It’s hard to find any organization more closely affiliated with the Republican Party than the U.S. Chamber of Commerce. In 2012 the business trade group spent $ 35,657,029 on federal elections, according to the Center for Responsive Politics. Of that, $ 305,044 was spent on behalf of Democratic candidates. Last year the Chamber went further to help Republicans than it ever had by running ads directly against candidates: It spent $ 27,912,717 against Democrats and only $ 346,298 against Republicans.

All that money ensures a careful hearing when the Chamber wants something from Republicans—but it doesn’t guarantee they’ll listen. On Oct. 1, House Republicans ignored the Chamber’s pleas to keep the government running. The shutdown is costing the U.S. economy $ 300 million a day, according to IHS (IHS), a global market-research firm, and it’s only the latest sign suggesting that the old adage, “Republicans are the party of business,” no longer holds true. From the austerity imposed by sequestration to the refusal to reform immigration laws to the shutdown and now, as appears likely, another debt-ceiling showdown when U.S. borrowing authority expires on Oct. 17, the GOP’s actions have put a strain on one of its most valuable partners: the business community.

With no clear resolution in sight, those partners are getting antsy. “A government shutdown is economically disruptive and creates even more uncertainty for the U.S. economy,” says R. Bruce Josten, the Chamber’s executive vice president of government affairs. “We are disappointed this has happened, and we urge Congress and the administration to work together immediately to find a path forward on the [continuing resolution] and debt limit to remove any threat to the full faith and credit of the U.S. government.”

Over the past several years the series of budget crises engineered by Republicans to extract concessions from Democrats has damaged economic growth by reducing spending and increasing uncertainty. “We estimate that fiscal drag from federal government policies was 1 percent last year and 1.8 percent this year,” says Dean Maki, chief U.S. economist for Barclays (BCS). “We do believe that there has been an effect on both investment spending and hiring the past few years because of the uncertainty over the events in Washington.”

The shutdown will add to these woes. An Oct. 2 Goldman Sachs (GS) report estimates that growth will be reduced on an annualized basis by 0.2 percentage points a week, meaning if the government were to remain closed for five weeks, fourth-quarter estimates of U.S. economic health would fall by a full point. Says Gentle: “Every second the shutdown continues pushes a delicate recovery closer to a recession.”

If Republican lawmakers were as responsive to business concerns as they once were, the chance of a prolonged shutdown would be slim. But that’s no longer the case. “Republicans are not the party of business anymore,” says Robert Shapiro, chairman of the economic advisory firm Sonecon. “They’re the party of antigovernment.”

The rising antigovernment sentiment within the GOP does not always conflict with the desires of the business community, especially on issues such as regulation. But the shutdown and debt ceiling are both matters where they do—and the unwillingness of Republican lawmakers to shift course underscores the diminished clout of their traditional business allies, despite the financial largesse. Asked by the Associated Press if he had heard business groups express alarm about the economic impact of a shutdown, Republican Representative Dana Rohrabacher of California replied, “No. And it wouldn’t make any difference if I did.”

A grim irony of the latest crisis is that the U.S. economy had just begun to speed up again. “Uncertainty doesn’t destroy activity; it tends to delay it,” Barclays’s Maki says. “As we got past the fiscal cliff and before the shutdown arrived, the winding down of uncertainty was helping job growth and investment spending growth. That’s why you’ve had stronger job growth this year than GDP alone can really explain.”

These improved conditions have begun to yield a rosier economic outlook than Americans had been accustomed to these past few years. On Oct. 1, the Consumer Electronics Association forecast that retail sales would increase 4 percent, to $ 738 billion, this holiday season. “The longer this drags on, the higher the probability that it will have a measurable impact on retail sales,” says Shawn DuBravac, the group’s chief economist.

The biggest fear among economists and business owners is another debt-ceiling scare or, worse, an actual default. In the months after the last such scare in July 2011, consumer confidence plunged, the Standard & Poor’s 500-stock index fell nearly 20 percent, and Standard & Poor’s (MHFI) lowered the U.S. credit rating.

The GOP also risks losing the political support of businessmen such as Gentle, who have traditionally been a pillar of the party establishment. “When talk of a shutdown first began, the perception among businesspeople I know was that this was just Washington being Washington again,” Gentle says. “Now they’re saying, ‘This is really getting in the way of operating my business.’ The business world is hard enough without Republicans making it even more difficult. It’s just ridiculous.”

The bottom line: Business owners and GOP-friendly donors like the Chamber of Commerce are losing patience with the shutdown.