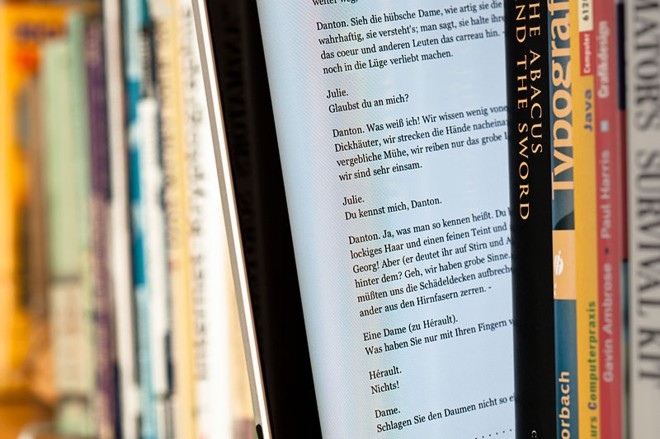 This is not one of those rants about missing the texture, touch, colors, whatever of paper contrasted with the sterility of reading on a tablet.

No, the real abomination of ebooks is often overlooked: Some are so ingrained in the product itself that they are hiding in plain sight, while others are well concealed beneath layers of commerce and government.

The real problem with ebooks is that they’re more “e” than book, so an entirely different set of rules govern what someone — from an individual to a library — can and can’t do with them compared to physical books, especially when it comes to pricing.

The collusion of large ebook distributors in pricing has been a public issue for a while, but we need to talk more about how they are priced differently to consumers and to libraries. That’s how ebooks contribute to the ever-growing divide between the literary haves and have-nots.

The Danger of the “E” in Ebooks

We need to stop thinking of and talking about ebooks as books, and more as we would an app or a software package: Ebooks are computer code that display text and pictures instead of instructing our tablets to do some task. Not only can we not legally fiddle with such proprietary software, but we can’t “buy” it, either — we lease it, according to terms and conditions set by the manufacturer.

It’s for this reason that we should stop using terminology like “bestseller lists” — when it really should be “most leased” lists — because that language of physical books reinforces a very dangerous notion of ownership. Buyers of physical books can do whatever they want with them, from loaning to friends as many times as they like to reselling at a used-books store. (Note that when a book owner does this, she gets that money — not the publisher.)

How do such restrictions reinforce the divide between haves and have-nots?

Imagine walking into a library or bookstore and needing three or four pairs of different glasses to read different books manufactured to specific viewing equipment. Or buying a book and then having to arbitrarily destroy it after say, two weeks. That’s just nuts. But it’s the current situation we’re in with ebooks.

A communications consultant and library advocate in Montgomery County, Maryland, Art Brodksy is working with the American Library Association on e-book issues. Previously, he was communications director for Public Knowledge, a public-interest group working on internet and copyright issues. Brodsky was also a former chairman of the Montgomery County Library Board, an advisory group that promotes a strong and vibrant library system.

The High Costs of EBook Pricing

The other way ebooks reinforce the divide is through their pricing structures. The only ones who win are the big e-tailers, not the authors or even the publishers and definitely not the libraries.

Publishers, too, are subject to the pricing (and other whims) of big e-tailers. This issue was at the heart of the antitrust case between Apple and Amazon, where Apple was found guilty of price fixing for working with publishers to raise the prices of ebooks because publishers were angry that Amazon had set prices too low.

Sadly, pricing changes the game for library access altogether because ebook distributors have radically changed the pricing from that of regular books.

Take the example of J.K. Rowling’s pseudonymous book, Cuckoo’s Calling. For the physical book, libraries would pay $ 14.40 from book distributor Baker & Taylor — close to the consumer price of $ 15.49 from Barnes & Noble and of $ 15.19 from Amazon. But even though the ebook will cost consumers $ 6.50 on Amazon and Barnes & Noble, libraries would pay $ 78 (through library ebook distributors Overdrive and 3M) for the same thing.

Somehow the “e” in ebooks changes the pricing game, and drastically. How else does one explain libraries paying a $ 0.79 to $ 1.09 difference for a physical book to paying a difference of $ 71.50 just because it’s the electronic version? It’s not like being digital makes a difference for when and how they can lend it out.

In another wrinkle: Random House, which jacked up its ebook prices to libraries 300 percent last year, limits the number of check-outs per ebook. This means libraries have to lease another “copy” when they reach a certain threshold … as if the ebook had died or something. In fact, that’s the problem some authors have with ebooks — not just that they earn less money on them, but that “They never degrade. They are perpetual. That harms writers directly,” as historian and novelist David O. Stewart has observed.

These authors don’t mind the high prices charged to libraries because they don’t even like libraries to begin with. Stewart has called libraries “undeniably socialist” because books can be loaned out (for free!) many times, costing writers money from presumably lost sales. This is the same justification book publishers use for their distorted ebook pricing.

But that’s just wrong. Most physical books in libraries aren’t tattered and worn out, particularly hardbacks. And just because an ebook may last forever doesn’t mean it will be read. Reader demand changes with the cultural context: When The Help was at the top of the Times’ fiction best-seller list for 15 weeks in 2011, readers had to wait weeks for copies to come back to their libraries; but now, 39 out of the 79 copies of the book in my local library system are available for checkout.

There are some enlightened authors, like Jodi Picoult and Cory Doctorow, who have joined the Authors for Library E-books campaign, which adds author voices to those of librarians and readers in support of equitable access to digital content. As their site notes, not only are many books not even available to libraries at any price, but those that are can only be purchased at 150 to 500 percent more than the consumer price — “forcing us to purchase fewer copies for library readers to discover.”

Doctorow is a big supporter of libraries, recognizing them as the one institution “whose only interest is in promoting authorship, books, and knowledge to the exclusion of things like shareholders or Kindle ebook sales and lock ins and ad sales.” He wants libraries to have his books, and to be able buy ebooks “the same way you buy books, the same way I buy books.”

Exactly. Ebook consumers should be able to lend and resell ebooks the same way we do with physical books — only then can an ebook truly be a book, with all the world-opening possibilities it offers.

But it would take an act of (our currently shut down) Congress to accomplish that small change. Such a change would have a huge impact, though. It would put ebooks within the reach of many more people through libraries (which also lend e-readers); through subscription services like Scribd’s newly launched one; through lower prices that resale books would bring; and through simple borrowing or even donating of books.

When we think of most e-enabled technology, we think of creative destruction, a kind of disintermediation that removes extra steps from common activities. With ebook technology, however, all we’ve got is extra layers — in pricing, in lending, in access — essentially, the destructive without any of the creative. Except maybe for a privileged few.

Recognizing the problem, the Connecticut state legislature passed a law requiring a study of pricing of ebooks to libraries. My local jurisdiction of Montgomery County, Maryland, also passeda resolution calling for county libraries to have “equitable access at fair prices” to ebooks. But such efforts have not been taken up in many places yet.